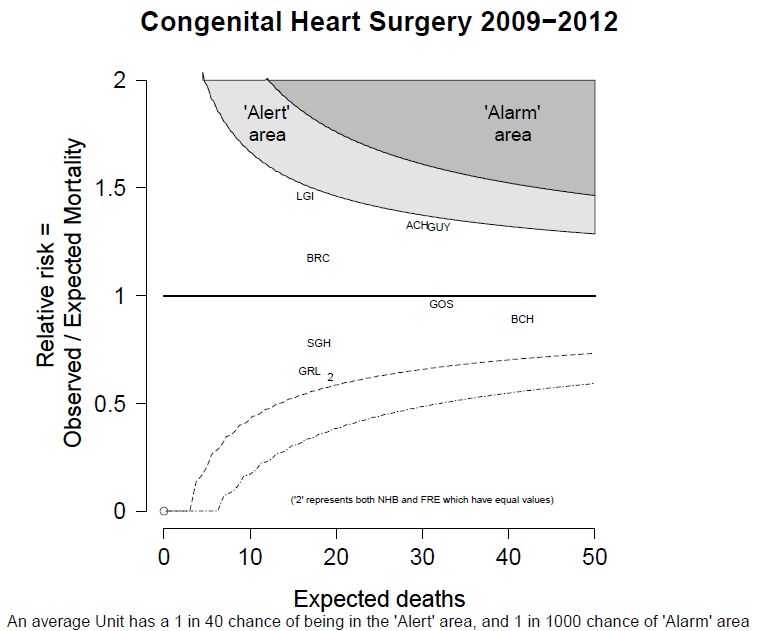 The National Institute for Cardiovascular Outcomes Research (NICOR) has published the results of its investigation into mortality after paediatric heart surgery in England 2009-12.

The short report has two main findings – the quality of data collection at Leeds General Infirmary (LGI) was woeful, and differences in mortality between all hospitals are likely to be explained by natural variation. 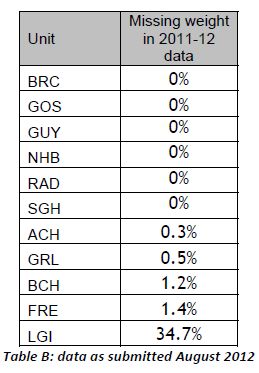 The ability of an institution to collect and audit its own results can be viewed as a measure of organisational health. As can be seen in the table, the performance of LGI in this respect was terrible, and much worse than other units. A cause for concern in itself.

On the more controversial point of whether the mortality rate in LGI was worse than other centres, no convincing proof of this has been found.

These numbers have been corrected for the difference in the types of patients and surgery performed in hospitals – the specific procedure performed, patient age, weight, diagnosis, and previous medical conditions. All these factors impact on the risk of death following surgery.

Any hospital above the black horizontal line has a greater number of deaths than predicted and any hospital below has fewer.

By “the law of averages”, it would be expected that there was a roughly equal spread of hospitals above and below the line.

As can be seen, Alder Hey, Guys, and LGI are all close to triggering an “alert”.

The report rightly states that these units “may deserve additional scrutiny and monitoring of current performance”.

The unambiguous message? Data collection and real-time analysis is core business in healthcare. Government and the NHS still do not have a grip of this. There are many more stories of significant differences between hospitals, hidden in poor quality data that no one is looking at.